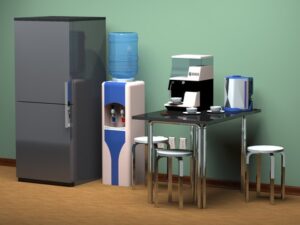 When we think about common fire hazards in an office, the first things that come to mind are probably overloaded electrical outlets and popcorn-burning microwaves. Refrigerators, on the other hand, are typically closer to the bottom of our list of potential fire hazards. After all, they’re cold, right?

That may be true, but recently a number of safety experts have raised concerns about the fire risk posed by aging fridges, particularly those made by manufacturers with histories of safety issues. In fact, an old refrigerator is one of the prime suspects in the recent warehouse fire in Oakland, California which killed 36 people.

So how can a refrigerator constitute a fire hazard?

Well, to begin with, refrigerators are typically turned on 24 hours a day, 365 days a year. This fact alone increases their fire risk compared to other common appliances that are only turned on when they’re actively in use. Refrigerators also contain a great deal of flammable insulation and plastics which act as fuel for small fires sparked by electrical malfunctions. Finally, the presence of water in refrigerators increases their risk of electrical fires.

This year, the London Fire Brigade suggested that regulatory agencies in the UK should publish new safety regulations to make refrigerators safer and less-prone to dangerous fires. In particular, the brigade wants refrigerator manufacturers to be required to include additional metal shielding to prevent insulation from catching fire. In 2013, the brigade went so far as to call refrigerators “the most dangerous household appliance when involved in a fire.”

To reduce the risk of fridge fires in your office, make sure that the refrigerator in your break room is a modern model made by a manufacturer with a strong safety reputation. Make sure the back of the refrigerator is made of a solid sheet of metal, rather than plastic. You should also discourage employees from keeping their own mini fridges in the office. And, of course, you should have the smoke detectors and fire extinguishers in your office inspected regularly to make sure they’re fully-functional and ready to protect you in the event of a fire.