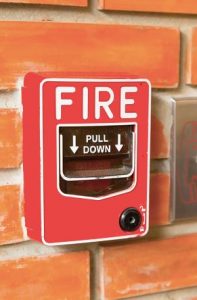 If you have ever walked through a commercial building or an industrial facility, you have no doubt come across a fire alarm pull station. These pull stations are usually red and white, and in the event of a fire, they allow for people to notify others about the presence of the fire by pulling on them and sounding an alarm. They are typically used in larger buildings where a fire might start without anyone inside of it realizing it.

While pull stations might seem like relatively simple devices, they have actually evolved quite a bit over the years. The very first alarm systems were much like today’s pull stations. Back when fire alarms were first invented, there were no smoke detectors or automatic fire sprinklers yet, so people had to pull down on an alarm that would let the local fire department know that there was a fire. The fire department would then respond to the trouble.

Since then, fire alarm pull stations have come to serve a different purpose. Non-latching fire alarm control panels rose to prominence in the 1940s and 1950s. They were used to sound alarms within a building when someone pulled them during a fire. But they didn’t latch like most of the more current options, and they didn’t need to be reset by a fire official. People could simply turn them on and off on their own.

The Evolution of Pull Stations

That changed in the 1960s and 1970s when latching fire alarm pull stations were introduced. These pull stations featured panels that were activated by breaking glass with a hammer or other device. When the glass was broken, a button would trigger the alarm and it would sound until a fire official showed up to investigate the situation.

Over time, people started to realize that the latching fire alarm pull stations that featured glass led to many false alarms. People would accidentally trigger them simply by bumping into them. Therefore, fire alarm companies started to develop pull stations that featured a lever that needed to be pulled to set the alarm off. This cut down on many of the false alarms. Moreover, in recent years, the pull stations have continued to evolve. Many still feature levers like the popular T-bar pull that need to be pulled down, but they are often covered by plastic to prevent accidental alarms.

Fire alarm pull stations have obviously changed a lot over the years, but they are still just as important as they ever were. They should be installed properly inside of any large property, and Life Safety Consultants can help with the installation process. If you would like to hear more about these pull stations and the protection they can provide, call us at 888-557-0558 today for more information.