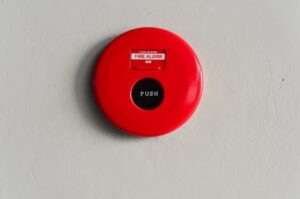 Installing a fire alarm in your home or business could help save lives in the event of a fire. It could also cut down on the amount of property damage that is done during a fire. A basic fire alarm will do this by performing several functions. Let’s take a look at those functions below.

How fire alarms are set off.

The first thing that a basic fire alarm will do is detect a fire that is taking place in a home or business. It can typically do this in a couple different ways. It can either detect the smoke associated with a fire or the heat that is generated when a fire starts. There are also some fire alarms that will spring into action once they detect water moving through a fire sprinkler. Whatever the case, fire alarms are, at the most basic level, designed to detect a fire as soon as it starts.

It will then alert those in a home or business about the fire.

Once a fire alarm has detected a fire in a home or business, it will move on to alerting those who might be inside about the fire. Most fire alarms simply sound an alarm that will get everyone’s attention, no matter what time of the day or night it might be. There are also some that will deliver a pre-recorded audio message to those inside of a building letting them what to do next.

It will notify the local fire department about the fire.

After a fire alarm has let those in a home or business know that a fire has started, it should then be set to notify the local fire department about the fire that’s in progress. This allows the fire department to arrive on the scene quickly so that they can start working to put the fire out. All three of these basic functions occur in a matter of just a few seconds and cut down on the threat of a fire claiming casualties or causing significant damage.

Some fire alarm systems can take things a step further and shut down certain functions inside of a building when a fire is detected. For example, there are systems that will call elevators to specific floors or cut off HVAC systems during a fire.

If you would like to learn more about fire alarms, Life Safety Consultants can tell you about the systems we have in stock. Call us at 888-557-0558 for additional information.