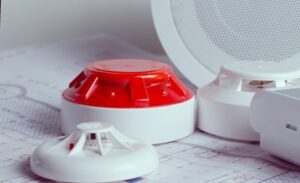 Standard fire alarm systems are designed to alert people to the presence of a fire inside a building when they detect one. They’ll often make loud sounds and activate blinking lights to let people know that there is a fire in the building that they’re in so that they can get out. The one downside with them is that that’s as far as they go. They won’t alert the appropriate authorities about a fire, which will be a problem if there isn’t anyone in the building at the time. The fire will continue to spread until someone happens to hear the fire alarm system outside.

Standard fire alarm systems work well for many business owners but monitored fire alarm systems take things to the next level. Like standard systems, they’ll alert those inside a building that a fire is taking place. Nevertheless, they’ll also get in touch with the local authorities to let them know a fire has started. This makes them useful for those who don’t always have someone inside their commercial property. It’ll provide round-the-clock fire protection and make sure a fire doesn’t go undetected inside a building for very long. The one downside with these systems is that they often require a monthly monitoring charge, which isn’t always in the budget for every business owner.

Which fire alarm system is right for you?

If you’re trying to decide whether to install a standard or monitored fire alarm system, you should start by weighing the pros and cons of each. You should also consider the cost associated with the two options and look at the layout of your building to see which would work better for you. From there, you can have the right fire alarm system installed so that you can start putting it to use right away.