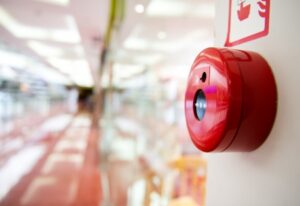 When you have a conventional fire alarm installed in your commercial property, it’ll include a central control panel along with fire alarms set up in different zones throughout your building and hardwired back to the control panel. In the event of a fire, the fire alarm that’s closest to it will go off. This type of system usually won’t allow you to pinpoint the exact location of a fire, but it will alert you to the presence of fire so that you can evacuate your building and notify the local fire department of the problem.