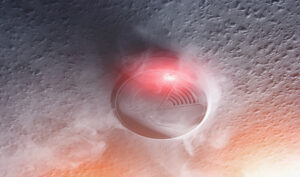 Most people know that they need to have fire alarms installed in their businesses. However, what they don’t always realize is that there are a few different fire alarms for people to choose from. You should pick out the one that’ll work best for your business before putting it into place. Here are your options.

Heat detectors have been around for a long time now and are considered to be the oldest type of fire alarms. They have parts inside of them that are designed to detect heat and go off when the heat reaches a certain temperature. They’re not as quick to spring into action as some of the other types of fire alarms, but they also have lower false alarm rates in most cases. They’re ideal for smaller spaces that are likely to be consumed by fire quickly if one ever starts.

Smoke alarms are a lot more sensitive than heat detectors and will often activate sooner than heat detectors will. There are several different kinds of smoke alarms, including ionization smoke alarms. They have a tiny amount of radioactive material located inside of them that is used to detect the presence of smoke in a room. They’re known to go off much quicker than most other types of fire alarms and respond well to fires that rage out of control quickly.

Unlike ionization smoke alarms, photoelectric smoke alarms don’t have radioactive material inside of them. Instead, they have a light beam and a photoelectric sensor that can detect smoke when smoke particles work their way into the alarm. They’re especially effective when it comes to smoldering fires that create a lot of smoke.

Do you need to install new fire alarms in your home or business, or do you need fire alarm parts for your existing alarms? Either way, Life Safety Consultants can set you up with exactly what you need. Call us at 888-557-0558 today to order fire alarm products.