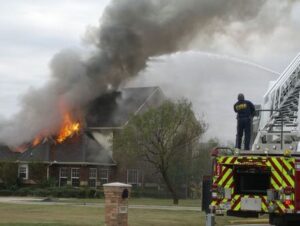 The Jones family in Upstate New York survived a devastating fire that destroyed all of their possessions and could have nearly killed them all– two adults, two kids and pets.

“We had smoke detectors downstairs and just one in the upstairs hallway,” remembers Sarah Jones. “Unfortunately, my daughter took the battery out of the upstairs one when it began chirping and didn’t replace it.”

Everyone was asleep in their bedrooms on the second floor one night. It was summertime in Upstate New York– the one time of the year it was actually hot outside as well as in their house. Therefore, they had the window air conditioner running, and it was loud.

Little did Sarah know that the three downstairs smoke detectors were all going off around 4:30 in the morning– she couldn’t hear them.

Interestingly, the fire, which had started in their garage, was so bright that the light from it shone through her window, directly in her eyes, waking her up. She looked out her bedroom window to discover flames engulfing her garage. Meanwhile, smoke filled her room and she began to cough.

“If we had smoke detectors with proper batteries in our bedrooms and hallway we would surely been awoken by them,” she says. “Thankfully, I saw the flames in time to get my husband and kids and pets to safety. Honestly, it was luck that we weren’t killed by smoke inhalation or the fire.”

Since their house burned down, the family had to spend several months living in a small rented apartment while they took time to figure out a new place to live. After all, once your house burns down, where do you go? It’s not like you can find a new house to move into the very next day. Then they had to work with their insurance company to figure out the monetary value of all the things they had lost so they could be reimbursed and then buy all new to replace that which was lost. Imagine having to start over to the point where you literally need to buy new appliances, new clothing, and even the simple everyday stuff, like toiletries and food. It’s a lot of work.

“We now have working smoke detectors in EVERY room of the new house,” says Sarah. “And when they chirp, we make sure to change the batteries so they’re always on, no matter what.”

The mother of two teenagers believes having smoke detectors in every room can literally save families.

“Most people think a house fire would never happen to them,” she says. “And hopefully it never will, but if your home did start on fire it would be terrible if you lost a loved one because you were not prepared.” 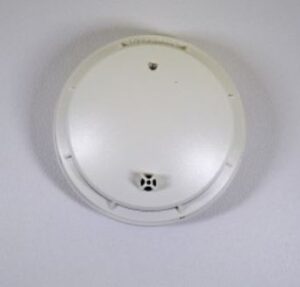 Did you know there are generally two types of smoke detectors? They’re either ionized or photoelectric or sometimes a hybrid of both.

Ionized smoke detectors detect intensely hot flaming fires well while photoelectric ones detect smoky smoldering fires well. If you go to the store and aren’t sure which type to buy, don’t worry because both work well enough that it doesn’t really matter which kind you get– both should work well in case your house catches on fire.

Smoke detectors in most homes are powered by a simple battery (usually one 9 volt) or a group of batteries attached to the back. These batteries should be checked and/or replaced yearly to ensure they’re going to work if and when they’re needed. Sometimes you’ll hear a detector “chirping,” like a bird, and that means the battery has worn down and needs replacing. Where the Jones family went wrong is the fact that their daughter heard a chirping long before the house fire happened, but instead of replacing the battery, she just took it out to stop the chirping. It would have been smarter to replace the battery so that her family members would have heard their upstairs detector going off that fateful summer morning. Had it not been for the mother being woken up by the blinding light of the fire’s flames outside her window, they might have all died. 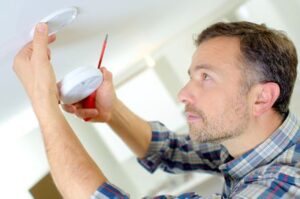 It’s estimated that the use of smoke detectors reduces the fatality risk by 50%. If and when a fire breaks out, especially when people are sleeping, having that alarm go off can literally mean the difference between life and death.

When fires spread, if the flames don’t kill you the smoke inhalation could. That smoke contains an abundance of carbon monoxide, and it kills a person very fast. Our lungs just cannot handle it. Did you know that smoke also contains hydrogen cyanide? That stuff will sting your eyes and burn both your windpipe and lungs. Should you ever get caught in a situation where smoke from a fire is around you, stop, drop, and roll out of the enclosed room so you can get away from the smoke as soon as possible. Too many minutes of smoke inhalation can easily lead to death.

The sooner you know there’s a fire, the sooner you can escape! Therefore, having working smoke detectors in every room of the house is a no-brainer. Make that happen because your life and the lives of ones you love depend on it.

If you need reliable smoke detectors for your home, check out Life Safety Consultants’ selection.