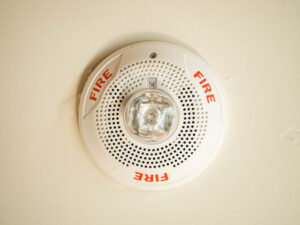 If you were to talk about building zones, you should know that they’re not determined by where wires are run for the fire alarm system. Actually, they’re determined by the building’s separations when it comes to fire-control and smoke-control.

Basically, a fire zone is a specific area of a building and each zone is separated by fire walls and fire doors. Sometimes an entire building is a “single zone,” especially if it’s small. Bigger buildings, though, have to be divided up with multiple zones.

There are two types of fire systems– conventional range (zoned) and addressable range. What do they have in common? They both link devices such as call points and fire detectors to a main control panel. What’s the main difference? An addressable fire system allows a person to pinpoint exactly which device has been activated. When a fire is detected, the device’s “address” is highlighted on the main control panel. This comes in handy especially when people are in the building and they need to know what area to avoid while evacuating the building. With a conventional system, authorities only know that a particular zone’s device has been activated.

Addressable systems allow for the monitoring and/or control of things like fire doors, sprinkler valves and other things. Addressable panels can be networked together which allows large sites to be monitored easily from a central point/security room.

Conventional systems have each detection zone connected to the control panel via a pair of wires. Addressable systems use loop wiring, whereas the cable is wired from the panel and returns to the panel. One cable with two wires connects all devices to the control panel. By the way– each device has an individual ID so it can be located easily as well as programmed.

Conventional systems cost less to buy but are more expensive to install because each zone needs its own cable (thus more cable is required). Addressable systems typically use one cable loop connecting up to 250 devices.

Finally, know this: the addressable system communicates to all of its detectors at all times whereas the conventional system lays idle. It only operates when a fire detector senses a fire.