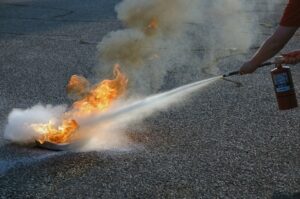 In this blog, we typically focus on tools and techniques that prevent fires. But no matter how well-protected your workplace might be, it’s important to know what to do in the event that one breaks out. That’s why the National Fire Protection Association (NFPA) has established some basic rules of firefighting. These rules are designed to not only teach people how to safely fight fires, but how to know when they should not attempt to fight a fire as well. Let’s start with the ‘Three A’s’ of fire response.

If you encounter a fire in your workplace, you should:

Activate the building’s alarm system or notify the local fire department by calling 911. If you’re unable to do this, designate someone else to do it for you.

Assist anyone in immediate need of assistance, as long as doing so won’t put you in harm’s way. You won’t be able to help anyone if you injure yourself in the process.

Finally, do not attempt to extinguish the fire until you’ve completed the first two A’s – activing the alarm system and assisting persons in need.

Do not attempt to fight the fire under the following circumstances: