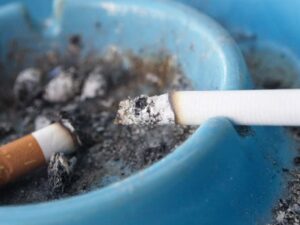 True story: one woman used her garage to smoke cigarettes, so it wouldn’t bother her husband in the house. She had a desk “out there” where she’d scroll through Facebook posts on her laptop computer, read the newspaper, or write out recipes in her notebook, while smoking. It was her “office.”

One day, she noticed smoke coming from the garage. It was on fire! The local firefighters came and put the fire out, but it was scary. Now you’d think it probably had something to do with careless smoking, with cigarette ashes causing the fire, perhaps? However, the firefighters determined that the fire was probably caused by a bag of fertilizer kept in a cabinet in the garage. Apparently, for whatever reason, the fertilizer did some form of spontaneous combustion, lighting itself on fire! So, yes, crazy things like that can really happen.

How to Avoid Garage Fires

With that in mind, if you want to prevent a garage fire, don’t store your fertilizer in there. Also, you may want to avoid smoking cigarettes in there, too. Moreover, if you use a small, portable heater, make sure you’re in the garage when it’s on, because left unattended, a fire could start. These are just some ways garages catch on fire.

Interestingly, the leading cause of garage fires is electrical– overloading outlets is a major reason, as well as shorts in wires or damaged wires. Therefore, take a look at the outlets in your garage today and notice if they have more than two things plugged into one outlet. If so, figure out a way to change that so you’re not overloading the circuit. Next, give a visual inspection of any exposed wiring to see if it looks “solid” or if there are any tears or frayed wires. You might very well need to call an electrician to come rewire the place if the wires look damaged.

Finally, if you have oil, gasoline, paints, propane and/or varnishes, it’s best to store them in a shed away from the house rather than in the garage. Sometimes, for whatever reason, these potentially flammable items do catch on fire, and it’s better for the shed to burn down than a garage with your nice $15,000 vehicle in it.

By the way, you can install a heat alarm in your garage. Ideally, it should be hard-wired, with battery backup and interconnected with your home’s smoke alarms. If and when the temperature rises, to, say, 175 degrees or more, that heat alarm will go off, alerting you to call for help to put the fire out before it spreads.